The domestic ferret did not originally exist as a distinct species, but rather was produced via selective breeding of its wild relative, the European polecat (Mustela putorius).  Please see our article Ferret Facts for more information on the ferret’s surprising history.

Despite centuries of domestication, ferrets retain many of their wild ancestors’ instincts.  In the following article, we’ll take a look at the “wild side” of ferret life.

Domestic Ferrets in the Wild

Both ferrets and polecats have been released in New Zealand (1879-1886) as a rabbit control measure.  Today a huge population of ferret-polecat hybrids occupies the island.  Along with introduced stoats (a Eurasian ferret relative) and weasels, they have decimated populations of several flightless birds…the rabbits remain relatively unphased!

Ferrets were also released in Australia, but dingoes, red foxes and cats apparently prevented their becoming well-established.  Feral colonies do, however, occur in predator-free habitats.

Thriving populations of escaped/released domestic ferrets may also be found in the USA, Canada, the Azores, Sicily, Sardinia and the Scottish Isles and throughout Europe; European populations interbreed with their ancestor, the European polecat, and with the steppe polecat.

Free-living domestic ferrets occur in forests, grasslands and scrub, as well as agricultural, suburban and urban areas.  They readily cross quite wide bodies of water, and usually adopt a nocturnal existence.

In Europe, released ferrets revert to the wild color phase within a few generations (most likely due to hybridization with polecats), while captive-bred color phases, such as fawn and white, persist elsewhere.

The diets of feral domestic ferrets vary greatly from place to place…rabbits, brush-tailed opossums, voles, birds and their eggs, hedgehogs, lizards, frogs, eels, carrion and invertebrates are all taken.

Male ferrets establish territories of .3 to .5 square miles in size, from which other males are excluded.  Females produce 1-3 litters yearly, for a total of 5 -15 kits.  In prime habitats, sexual maturity may be reached in 6 months, but more typically occurs at 9-12 months of age.

Ferrets have, through centuries of selective breeding, been rendered much less “wild” than their polecat ancestors.  Stories of ferrets playing with dogs, cats, rabbits and parakeets abound, and field studies have shown that many released domestic ferrets do not survive long in the wild.

While working at the Prospect Park Zoo in NYC, I once came upon a domestic ferret that had been thoughtlessly tossed into an exhibit housing black-tailed prairie dogs.  The plucky rodents, perhaps primed by centuries of contact with their arch enemy, the black-footed ferret, were swarming all over the bewildered animal, which seemed utterly incapable of mounting a defense.  Quick removal from the exhibit no doubt saved the unfortunate creature’s life!

A pair of ferrets that I kept as store mascots regularly engaged in mock battles with a scarlet macaw, and seemed uninterested in the rodents housed nearby.  However, one night they escaped their enclosure and by morning had slain scores of mice and guinea pigs…the macaw remained unscathed, but whether this was in deference to his powerful bill or a “prior relationship”, I do not know!

Weasels entering henhouses have been known to kill far more than they can eat.  It is theorized that the hunting instinct goes “awry” in the unnatural situation presented by large numbers of prey animals confined to a small space.  In any event, it is imperative that ferrets, even those of mild disposition, be strictly supervised around other animals. 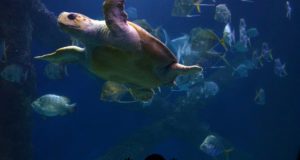