Home | Dogs | Dogs and Babies: Tips for Introducing Your Pet to Your Newborn

Dogs and Babies: Tips for Introducing Your Pet to Your Newborn

When my husband and I were expecting our first child, part of our preparations included getting Chester (our 6 year old hound dog) ready for the baby. We have all been told to bring something home from the hospital with the baby’s scent on it but did you know there are other ways you can help prepare your dog for their new little brother or sister?

Set Up The Stuff

Babies come with tons, and I mean TONS, of stuff. You can help your dog prepare by slowly putting the new items out. Set up your crib one day and then that fancy new swing or play mat a few days later. Take it slow and let him get used to each item before adding the next. Introducing these items gradually will give your dog a chance to smell and explore each one, and then when your baby arrives he will already be used to those things being in the house. 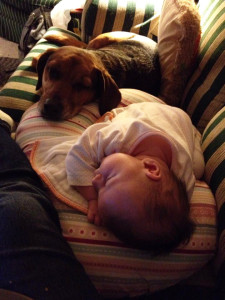 Have friends with babies? Have them over. If your dog has never been around a baby you may want to see how he reacts to the crying and all the new little movements. Some people have even used those electronic babies you were forced to bring home from health class. Lucky we have lots of family and friends with kids, so Chester has had exposure to children of all ages.

Let your dog know what’s okay and what’s not. If he won’t be allowed in the nursery after the baby comes, don’t let him in now. If you let him do things now that you won’t let him do when the baby arrives it’s going to confuse him and he could end up resenting you or your little one.

Tell Him About The Baby

Everyone says that dogs can tell when you are pregnant and I really believe that Chester knew. It might sound silly to a non pet owner, but I talk to Chester like he’s my best friend so naturally I told him all about his little sister before she arrived. I like to think he understood and that helped him prepare.

Stock Up On Treats And Toys

In the weeks after you bring your little one home your front door will be like one of those revolving doors at the mall, people coming in and out all the time. Chester is extremely food motivated, so we stocked up on lots of different types of treats. We got some of his favorite training treats to reward him for good behavior or if we needed to temporarily distract him from the door or other items. We also loaded up on some long lasting treats like Greenies , filled bones, and Indigo chews. These were good to have when he would get a little too excited and we needed to divert his attention for a longer period of time. If you are worried about over treating or your dog is on a diet, toys can also be used to keep your pup occupied.

This may be common sense but make sure you have a reliable pet sitter on call. Child birth is unpredictable–you can go into labor at any time and be in the hospital for an undetermined amount of time. Make sure you have one, if not two, pet sitters that will be able to get your dog within a few hours when the big day comes. 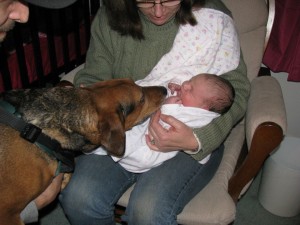 Chances are that you haven’t seen your dog for a few days, so he is going to be really happy to see you. Give him a little time to get his excitement out and give you all the kisses he wants before bringing in the baby. What worked for us was to have my mom take Emmalynne into her nursery when my husband brought Chester home. Once he was over the excitement of seeing me he sniffed around at the diaper bag and car seat then we took him in to meet his little sister.

Your dog can tell if you are nervous and that can make him uneasy, if you stay calm and don’t make a huge deal out of him meeting the little one he won’t either. Remember to take it easy on your pup; this is a huge adjustment for him too. Dog toys and baby toys are surprisingly similar so you can’t really blame him for chewing on one you leave out.

Make sure your dog gets enough exercise and attention. Try to stick with his normally scheduled feedings and walks; you don’t want to have to deal with accidents just because you didn’t have time to let him out. We take Chester with us everywhere that we are allowed to. So even though it might be easier to leave him home sometimes, we make sure that if we would have taken him before Emmalynne was born, we take him now. I look at it more like; we now have two kids rather than one kid and a dog.

These are some of the things that helped Chester make the transition from only child to older brother. Emmalynne is now two months old and Chester has taken on the role of her protector. When someone new holds her he is watching their every move. He is more alert and curious about abnormal noises. In the mornings when she’s in our room sleeping and I’m getting ready he lays in the doorway where he can keep an eye on both of us. It makes me feel good knowing that he is looking out for her (as all big brothers should). I think he has accepted her as a member of our family and I am excited to see how their relationship grows as she gets older!

2014-05-05
Megan Krchnar
Previous: Low Cost or Do It Yourself Pet Portraits and Dog Paintings
Next: That Pet Place Attending Blog Paws 2014

Read other posts by Megan Krchnar

I have been a pet parent to Chester, a 6 year old hound mix, for 5 years and owned a variety of small pets in the past. We have recently expanded our family by adding a baby girl. I enjoy sharing my pet knowledge and experiences in hopes that others will learn from them.