The National Dog Show – A History of Canine Excellence

This November, dog lovers from across the country are excited for the annual National Dog Show. Dogs, and their owners, will travel to Philadelphia, Pennsylvania with hopes of winning their individual breeds, groups and the prized Best in Show award.

This year’s event spans the weekend of November 14th and 15th and will be held at the Greater Philadelphia Expo Center. The National Dog Show itself is held on Saturday, and includes all competitions and the awarding of the Best in Show prize. On Sunday, all dogs are available for exhibition, along with fun competitions and activities. It is referred to as a “bench show” because all dogs, when not in competition, are displayed on assigned benches so visitors can meet and interact with the various breeds.

One of the top canine events in the world, The National Dog show is sanctioned by the prestigious American Kennel Club and hosted by AKC founding member The Kennel Club of Philadelphia. The Show has roots that date back as far as the late 1800s, when the forerunner of the KCP first started staging canine related events. Reorganized and renamed, the Kennel Club of Philadelphia ran their first dog show in 1912. It has been held annually ever since (with a short break during the Great Depression) and has arguably never been more popular.

The event itself is not just an opportunity to see many beautiful dog breeds in top form, it is also a fundraiser that helps many canine-related causes. Past beneficiaries include the University of Pennsylvania’s Veterinary School of Medicine.

Winning Best in Show is not easy. In order to be considered for the competition, each entrant must be considered an American Kennel Club champion. To earn this status, a dog must accumulate 15 points by defeating other dogs at an AKC sanctioned show. The most decorated dogs in the United States can get up to 50,000 points in a single year!

The Show’s competition begins with champion dogs from the more than 175 AKC registered breeds. Judges compare each dog to their mental image of the perfect dog as described by their breed’s official top standard. Best in Breed winners are then assigned to their related groups.

The Group stage is divided into seven categories: Terrier, Toy, Working, Sporting, Hound, Non-Sporting, Herding. Each group represents the characteristics and function for which their breed was initially bred. 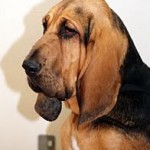 Last year’s winner was from the Bloodhound breed.

The elite seven that are deemed Best in Group then move forward to the final stage. Judged to be the cream of the crop, the ultimate winner receives the coveted red, white & blue ribbon and is crowned Best in Show.

Over the last 14 years, various terrier breeds have had the most success in winning the top prize. Last year’s winner was a playful bloodhound named Nathan. He has become one of the top ranked canines in the country and is a testament to the honor that comes with winning the National Dog Show’s Best in Show award.

The 2015 National Dog Show will be held on Saturday November 14th and 15th. The competition will be aired on Thanksgiving Day at noon on NBC.

2015-11-11
thatpetblog
Previous: 7 Things My Dog is Thankful For
Next: My Funny Farms Christmas List