Having worked at That Fish Place’s Small Animal Room for nearly 6 years, I’ve heard many a misconception from customers. Most of this I attribute to the grape vine effect. One person has a bad experience with a pet, tells someone else about it, and then that story gets embellished or added upon over time, until it becomes a completely fictional story. Today, I’d like to debunk some of the more commonly heard myths I’ve heard over the years. A common misconception is that ferrets smell terrible and there is no way to combat the odor.

If you think about it, all animals have an odor, even we humans. If you had no toilet and no one to clean up after you, you’d smell bad too! The reason ferrets catch most of the guff when it comes to odor is because a lot of times their cages are not being looked after as much as they should be. While they do emit a musky scent in order to communicate with one another, this should not overpower the animal’s environment unless you have several in one area. Their musky scent will rub off on toys, bedding, and furniture and those items should be washed once a week to keep the smell from building up. A ferret’s bedding and litter box should be scooped out and changed frequently.  I’m talking every day or every other day, because ferrets digest food quickly and make a lot of waste.  It can be a lot of work to keep up with a ferret, the odor will not stink up your house if you are diligent in your cleaning habits.

Some people are also convinced that ferrets are nasty and bite all of the time.

Far from it! Ferrets are extremely playful and crave human interaction. This myth was birthed from the fact that ferrets will play-nip when really excited. They do this with each other, so in their minds it is normal to do this with us as well. We do not have the thick skin that ferrets have, so sometimes play-nips can hurt a little. The best way to combat this is to allow the ferret to bite softly when playing, but as soon as he is causing you pain, tell him no in a sharp voice and put him back in his cage for a time out. After some time, the ferret will learn that playing too roughly ends the fun. As always, supervise ferrets and small children!

It’s been said that ferrets do fine on a diet of cat or dog food.

There was a time when this was the standard diet for ferrets. However new diets made specifically for ferrets have become available over the years and are highly recommended over cat and dog foods. The main problem with cat and dog food is they usually contain a lot of corn or wheat, which is indigestible and useless to a ferret, and they also do not have the high protein levels a ferret needs. Ferrets are strictly carnivorous, which means they do not eat fruit, seeds, veggies, candy bars, cereal, or anything else that is not pure meat. A ferret kept on a poor diet will eventually suffer complications from poor nutrition. Please feed your ferrets foods designed to provide them with the nutrition they need.

Some think that rabbits should be kept outside because they are dirty.

An animal is only as clean as its environment. If you are not cleaning the cage every day or so, yes, your rabbit will get dirty. While many people still keep their bunnies outside in a hutch, I personally do not recommend this for a few reasons. For one thing, the rabbit will have no real escape from the heat, cold, wind, rain, or snow. Even if you provide a hide out, your rabbit cannot completely escape these elements as his wild cousins can. Wild rabbits go underground when the weather acts up and most hutches do not have underground burrows installed. For another thing, rabbits are susceptible to parasites like fleas, mosquitos, ticks, and worms when kept outside. They could also be stolen or teased by neighbors, harassed or attacked by other animals, or they could escape and be at the mercy of the wild. Rabbits kept indoors live longer, are usually looked after better, and are much more fun because they are right there with their families and can interact with them more.

Rabbits are not animals people associate with training and tricks.

Your bunny is a pretty smart fellow, but you have to challenge him! Rabbits can be litter trained just like a cat with simple patience and proper location of the litter box. A fixed rabbit is easier to train by the way, as he or she will not feel the need to mark territory. Rabbits respond well to positive reinforcement and with patience and repetition, can be taught to do anything from fetching balls, to leaping through hoops, to coming when called. Never scold a rabbit that has done something naughty or won’t listen to you. Remember, the best way to a bunny’s heart and mind is treats and love.

Next time we’ll talk about guinea pigs, rats, and chinchillas. 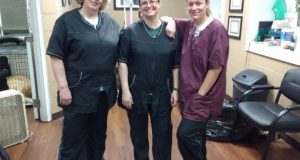