“My eyes are your eyes, to watch and protect you and yours. My ear are your ears to hear and detect evil minds in the dark. My nose is your nose to scent the invader of your domain. And so you may live, my life is also yours.” These words, by an unknown author, are the referred to as the K-9 Promise.  They are inscribed on many of the memorials and tributes dedicated to War Dogs and K-9 units across our nation – memorials created to remember the thousands of canines who served with American handlers in all branches of the U.S. Military and in all wars foreign and domestic.  When you remember servicemen who have given their lives for their country this Memorial Day, remember that many who returned home may owe their lives to these four-pawed heroes and friends.

Dogs have been used in warfare since ancient civilizations were battling with spears and bows. Large fighting dogs and mastiff-type breeds were taken to war by the thousands, trained to attack advancing armies. As the centuries passed, the role of dogs grew more specialized.  In the 1800’s they were used in Europe as messengers, unofficial military mascots and guard dogs.

By the turn of the century and the start of the first World War, various breeds were being trained and utilized by military handlers around the world. German Shepherds, Labs, and Dobermans are were and still are the most widely used breeds. In each war since WWI they have served as messengers, sentries, scouts, trackers, search and rescue, mascots and for other more specialized duties; each performed with unquestioning and unwavering loyalty to their handlers and in service to their country.

Animals have been employed by armies for thousands of years. Horses, in particular, have been notable tools of war, carrying their riders onto bloody battlefields and hauling cannons, carts and other equipment for the soldiers. Pigs, oxen, camels, elephants, mules, cats, rats, pigeons and other birds have been used in various ways (including as weapons, messengers and transport) in human conflicts since antiquity.

As warfare has evolved, the significance and respect for the military dog’s life and service to his country has, too. Past, present and future military dogs have earned a special place in our nation’s heart. These heroes are loved, respected and memorialized across the nation and around the world for their service and sacrifices. Homage to a few of these dogs and their handlers is paid on the U.S. War Dogs webpage.  I encourage patriots and pet lovers everywhere to remember the fallen this and every Memorial Day and every day in between.  “They protected and watched over us at home and on the field of battle. We are forever grateful for their undying loyalty, devotion and faithful service. They are not forgotten.”

The links highlighted in the article will take you to touching tribute and awareness pages. This poem is etched into one of the incredible K-9 memorials. 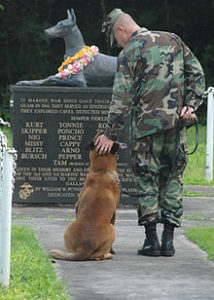 I was trained to use my eyes to
watch and protect you from harm.
My ears to alert you of impending
danger like an alarm.
My keen sense of smell to detect
an enemy close at bay.
Yes I was a soldier who gave my life
so you could fight another day.
So remember me as time goes by
This soldier dog so true.
For I had only one life to give
and I gave that life to you.

Previous: Small Pets for Your Children – Choosing His or Her First Pet- Part 3
Next: Litter Box Training for Newbies – The Basics